Things are getting hot in the office… and in real estate

These are strange days indeed in the local real estate sector.

The upcoming launch of a couple of new real estate agencies, coupled with the merger/expansion of another runs counter to the market itself, which has been described variously as anywhere from tight through to the toughest it’s been in a generation or more.

So where does that leave us? Well, I would argue effective marketing is now more important than ever and professional photography and floorplans are the cornerstone of any sales campaign. Vendors should be asking themselves how they can make their property stand out from the crowd and the best images possible are obviously a great starting point. Coupled with some attention to detail in preparing the property for sale, the selection of tried and trusted sales agents, and an accurate pricing strategy, professional images can and do make a world of difference for smart vendors.

Beyond the trials and tribulations of the real estate sector we’ve had a big week ourselves, with the much promised new heater finally arriving. Installation day was supposed to be Thursday, but the unit didn’t arrive in time so it wasn’t Friday until the crane came and the boys from UniMech tackled the installation. They did a good job getting it up and running in time for a full weekend of studio shoots.

Images from the weekend will be posted here and on Facebook in the coming weeks, but I can say that they are some of the best studio work I’ve done so keep an eye out  for the new studio shots. 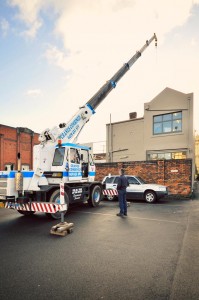